“I want to stand as close to the edge as I can without going over. Out on the edge you see all the kinds of things you can't see from the center.” Kurt Vonnegut Jr. 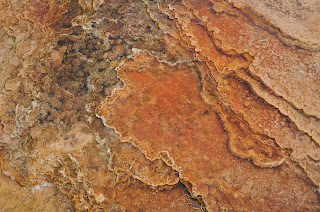 Still happy in Auckland, and with New Zealand generally. We had a great trip to the US in May and June this year. It included VANCOUVER!!!, Seattle, Tacoma, Long Beach (WA), Astoria (OR), Fargo (ND), Glendalough State Park (MN), Billings (MT), and Mammoth Hot Springs, Old Faithful (Yellowstone), Cody (WY), and Rapid City (SD). 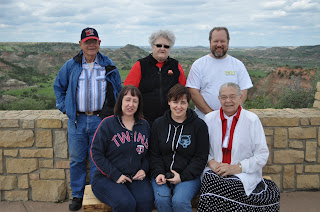 It was great to see my family: my youngest niece graduated high school, my brother and sister-in-law came up to visit, this picture was taken in the ND Badlands on the way to see my dad's cousins and his sister and her family (RIP, Aunt Linda!). 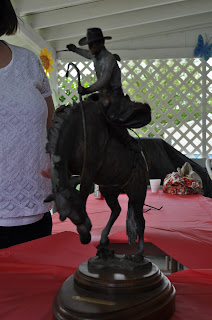 This is my father's cousin's work. He does amazing work, right?
I love to plan travel, and I love seeing old friends. Combining the best of both, I'm in the process of planning a trip to the South Island with friends visiting after Christmas.
Unfortunately my ankle is still damaged after fracturing the fibula on a quiet hike with Zeus, my dog, November 2012. Almost 9 months later, I'm waiting for the surgical consultation for the longitudinal tear in the peroneus brevis tendon that was recently diagnosed and seems to not want to heal.
Zeus, Ruby, and I are still doing Dogsport. I was recently voted president of Dogsport NZ (what were they thinking!? ha ha) and Zeus obtained his BH in April 2013. Ruby and I are still working toward IPO 1. What am I talking about? See this video for a brilliant breakdown. 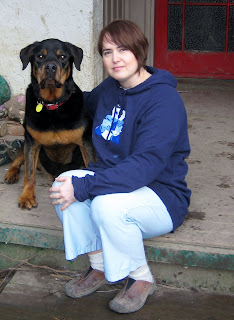 My Rottweiler, Fargo, who came with us from San Diego, CA, was beaten by the cancer growing in his liver and adrenal gland.  He was 12 years old, and was an excellent dog. I miss him terribly.

I had been asking myself when would be the time to euthanize him. No one could answer this or help with this question. Fargo's vet had told us some time ago that there was nothing that could be done for him. He was still eating, and able to conduct his day to day living, but his gut was just not functioning properly. That couldn't have been comfortable for him. He had been doing well for awhile, but seemed to decline fairly rapidly after we returned from Wellington in August.
We decided that we had to be strong for him, and decide what he could not- to end this mortal coil.  I am ultimately happy that I could release him. We were there with him, when he went, and it felt like a relief. That sounds bad, but it is not- he had peace and comfort at the end.
I have Zeus and Ruby to keep watch over me.  Zeus is quite a collector. He brings all sorts of stuff onto the front porch to play with. This includes logs, plant pots, plants, watering cans, and other assorted detrius. He especially loves LOGs and rocks.  In the house, he likes to tear up stuffed toys, and after we stopped buying these, he moved on to pillows and his dog bed.
I found this amusing, but not so much when I had to pick up all the fluff. 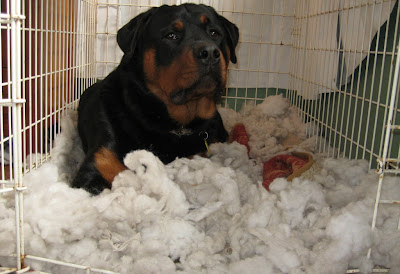 I bought more fabric to make him a new bed, but I am fairly certain that this was a waste of money.  We'll see. I haven't made it yet.
What better to soothe the soul than a walk in the woods? Or bush, as we call it in NZ. To contemplate the giant Kauri, hear the falling and running water, to touch the fuzzy moss- very nice.  The poto is from Fairy Falls, a walk that's about 15 min from our house. The Rugby World Cup is in New Zealand this year, and we're seeing lots of upgrades to Auckland.  One is the new Wynard Quarter, formerly known as the Tank Farm.  The highlight is the pedestrian bridge that draws up for passage of boats in/out of the marina.  The bridge goes from the Viaduct area, which is full of restaurants, to this newly developed area, with more restaurants.  I was amazed at the number of people there. This will likely drop off as the novelty wears off. 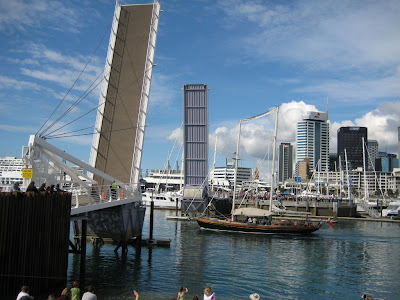 Happily, it gives greater access to the seafood market, which is the freshest shop in the city. But is this good? I recently watched the doco, The End Of The Line, the premise of which is that if the world population doesn't stop supporting the work of large industrial fisheries that rape the ocean of inhabitants, we will all rue the day. I'm thinking, it's too late, we're all doomed. Enjoy it while you can, everyone!
So it's September now, and that means Spring is here.  I'm so OVER winter- sick and tired of wiping muddy dog paws, thank you very much.
Posted by NewKiwi at 9:59 PM

What the hell happened in July/August 2011 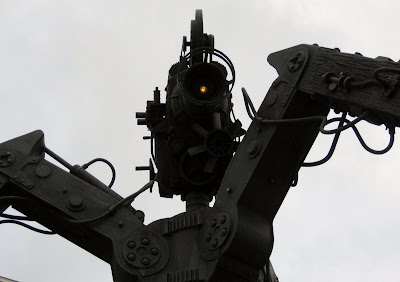 July 2011 has been full of events. It featured the 5 year anniversary of my thyroidectomy, my birthday on the 17th, and the 43rd New Zealand International Film Festival.  The birthday overlapped with the NZIFF, so I saw a film that day and had dinner with my sweetie at Dine, Peter Gordon's swanky restaurant downtown.  I ordered the twice cooked free-range pork belly, and it was divine. 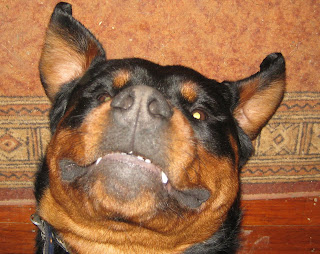 I commemorated the thyroidectomy by having another (unrelated) surgery. This also was during NZIFF and prevented me from attending a few films I had tickets to. I also missed 4 days of work. I had seriously underestimated the recovery time, and 3 weeks later, it is still giving me some niggling pain. I had convinced myself that it would be no big deal- outpatient surgery, nothing serious. I was wrong, I felt really wrecked and  I hope I don't have to do that again. I did manage to see many films, despite this. I was a volunteer usher again this year, but only ushered a handful of films so that I wouldn't burn myself out. You can visit the NZIFF website link above to find out more information about the films if you want. The films I ushered were (category and comment in parenthesis):
The films I bought tickets to were:
So that totals 15 films. It was a good fest.
Fast on the heels of the Film Fest was Beervana, a craft brew festival in Wellington. We got to see Mt Taranaki from the plane window, which is usually covered with cloud. It has a cap of snow at this time of year. I like how it rises off the flat land and is framed by the ocean. 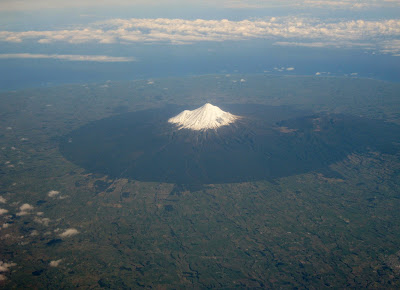 Darin and I put the dogs in the kennel and flew down to attend the awards dinner on Thursday and the Beervana event on Friday. My sister and her husband were also there. The dinner was excellent, with many different kinds of NZ beers and ciders for drinking. I enjoyed it more than the Beervana event, because Beervana was crowded and the people pouring the beers couldn't answer some quesitons I had about what I was tasting. 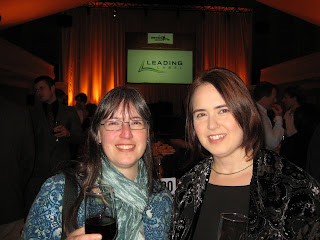 Wellington has great food. I've eaten at the restaurant Sweet Mother's every time I've been to Wellington (3 times), it's become a tradition. We also found some great Mexican food, thanks to my sister. This place is tucked into the  back of an alley off of Cuba St. No burritos here, only enchiladas and tacos. The guy said that burritos are not what people ate in Mexico City. His mole sauce was terrific. 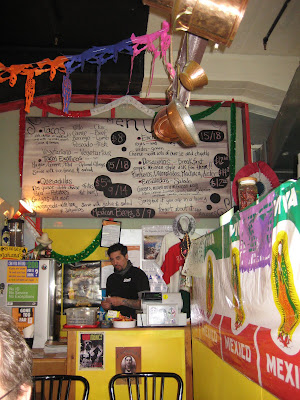 I also did a bit of shopping (new hat, wallet, and tried on boots) and bummed around the hotel room, eating sushi and watching How To Train Your Dragon (twice). I like that the Night Fury dragon looks like a cat.
Posted by NewKiwi at 12:45 AM

NewKiwi
I grew up in North Dakota, got a BS at NDSU, a MS at Purdue Univ., and lived in San Diego for 10 years. I moved to Auckland, NZ with my husband and pets in 2006.